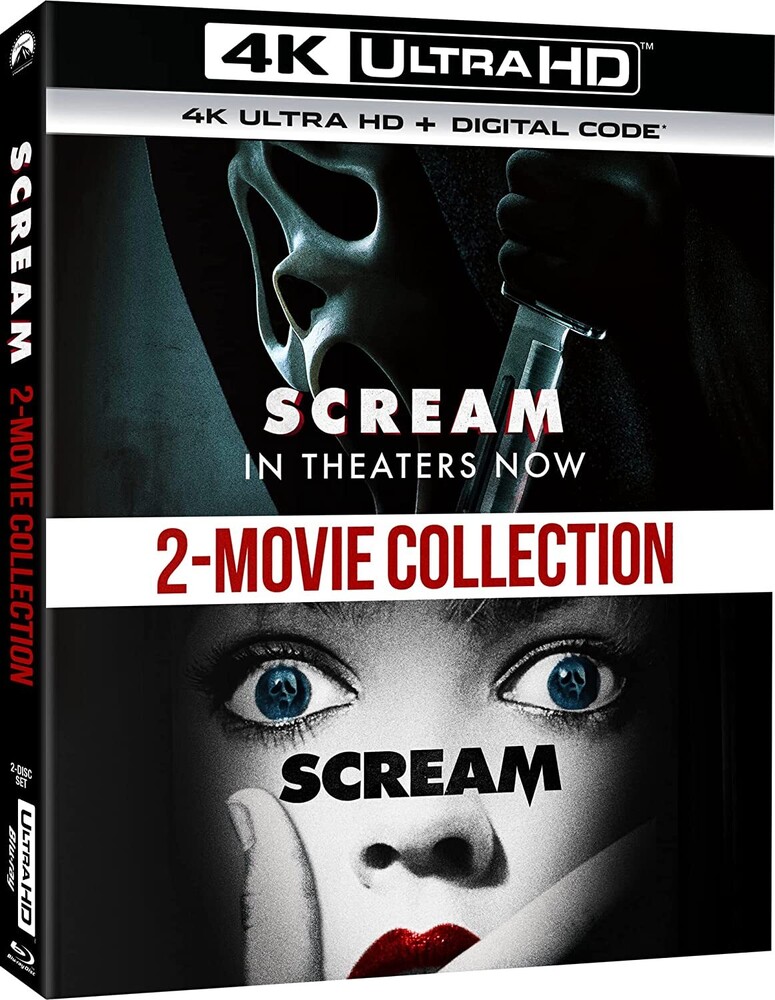 Two-disc set includes: Scream (1996)Director Wes Craven's slyly self-referential shocker follows a group of high school horror film fans in a small California town who are systematically slaughtered by a mysterious masked slasher. Newscaster Gale Weathers (Courteney Cox) thinks this killer also did in teenager Sidney Prescott's (Neve Campbell) mother the year before, even though the supposed murderer is behind bars. Skeet Ulrich, David Arquette, Rose McGowan, Matthew Lillard, and Drew Barrymore co-star. 110 min. C/Rtg: R Scream (2022)In the '90s, the burb of Woodsboro was murderously menaced by the shrouded slasher dubbed Ghostface-and now, someone has claimed the mantle and is continuing the body count. A new generation of pop culture-savvy teens struggles to suss out the killer's identity before they're picked off in this effective and winking "requel" for the meta mayhem franchise. Melissa Barrera, Jenny Ortega, Jack Quaid co-star with legacy performers including Neve Campbell, Courteney Cox, and David Arquette. 114 min. C/Rtg: R
AVAILABILITY ON LILLIPUTRECORDS.COM DOES NOT AUTOMATICALLY REFLECT AVAILABILITY IN STORE. "IN STOCK" ON LILLIPUTRECORDS.COM DOES NOT REFLECT "IN STOCK" AT OUR RETAIL STORE, AS "OUT OF STOCK" ON LILLIPUTRECORDS.COM DOES NOT REFLECT IN STORE INVENTORY. PLEASE CALL (414)271-8590 FOR AVAILABILITY.
This website uses cookies to personalize content and analyse traffic in order to offer you a better experience.
I accept Learn More
back to top